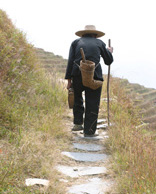 I'm not sure how it all came about, but I got an invitation out of the blue in 2003 to visit China and present a TV documentary series on travelling around the country. I flew to Beijing in early October, spending three months immersing myself in the culture and heritage of the world's most populous country, and arguably one of its least known or understood.

My travels were documented by a TV crew from independent Chinese production company Dalian Europe-China TV Productions. The result will be a series of 12 programmes for screening by TV stations around the world.

The cameras followed me as I visited some of China's best-known tourist destinations as well as less familiar places, seeing the icons which draw visitors from around the world but also searching out sights and experiences which visitors often miss, talking to local people and tourists I met along the way. My aim was to observe, participate in, probe and explain about the places I visited, the experiences I underwent and the people I encountered.

This was my first time in China and it proved to be a voyage of discovery for me. Spending three months travelling with a Chinese film crew also provided a unique opportunity for me to learn more about myself and how to cope with challenges, such as never having fronted a TV programme before or been away from the UK for so long.

This is an illustrated diary of my journey, which took me across China from glitzy, modern cities to remote villages where the way of life has hardly changed for centuries. Places I visited included Guilin, Lijiang, Kunming, Guangzhou, Suzhou, Tongli, Jingdezhen, Qufu and Chengdu.

Click on the links below or on the map to the right to follow my journey and see some of the places I visited.